An abandoned dog with an incredible will to live has recovered after surgeons repaired his severely injured jaw. Noah has since been adopted and we have received updates that he is happy, well and thriving.  To honor Noah and to help ailing cats and dogs who come under the care of the Mary S. Roberts Pet Adoption Center so that they, too, can have bright futures, MSRPAC established Noah’s Fund. 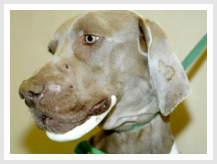 Dr. Diane Craig at Veterinary Surgical Specialists in Tustin received her charge Tuesday after a call from the Mary S Roberts Pet Adoption Center. “Noah,” a Weimaraner bought four years ago at an Orange pet store, had been found badly hurt and starving in Riverside County. The Good Samaritan who found the dog (and named him) figured Noah had been attacked or beaten. It wasn’t until the dog was prepped for surgery that doctors got the whole picture. Noah had been shot through the face.

X-rays would define Noah’s incredible story of survival: Shrapnel from a bullet remained lodged in the dog’s muzzle and shattered mandible. An inch of his tongue “was just blown away,” Craig said. Teeth were missing and his lower jaw hung in pieces by soft tissue. Noah lived this way, Craig estimated, for least three weeks.” He was pretty much starving to death,” she said.

An infection had set in and swelling was severe. The vet used a lot of metal to piece the bones back together. An acrylic cover that resembles an exaggerated smile protects the surgical pins, which will be removed in six to eight weeks.”

A day after surgery Noah was happy and eating voraciously, despite the newly wired jaw. His silver coat was marred by scars and evidence of starvation, with bones protruding prominently through his skin. Noah showed no obvious signs of emotional trauma and eagerly approached the hospital staff and visitors for affection. Mostly, he’s just hungry. An ID chip in Noah’s back led the Adoption Center to dead ends. He was bred at a puppy mill in Missouri and sent to the Moon Doggies pet store at The Block of Orange, which closed in mid-2008.

The dog’s owners never enhanced the chip’s data, so the trail of where Noah lived remains a mystery”. Noah spent the next eight weeks with a foster parent, who helped him heal and gain weight.